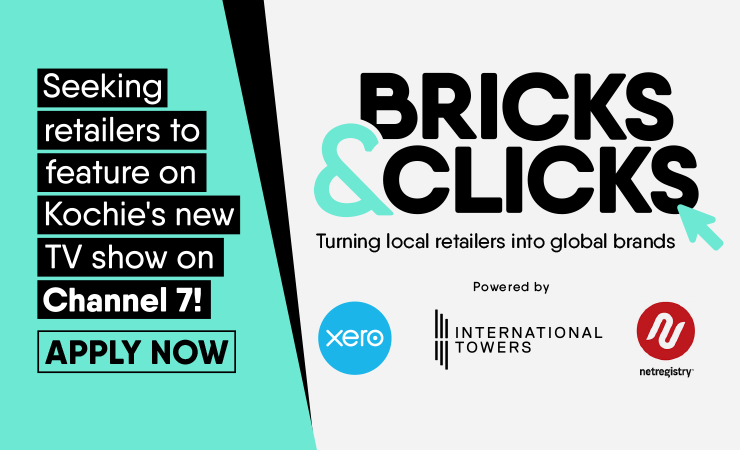 A passionate cohort of Australian retailers have immersed themselves in the innovation community at International Towers as part of the Bricks & Clicks initiative by Kochie’s Business Builders.

The program aims to transform local retailers to global e-commerce brands. Two intensive Sprint-Weekend workshops were hosted by International Towers in Barangaroo and featured a team of expert mentors including International Towers Fund Manager, Liam Timms, and representatives from tenant partners Gilbert + Tobin and the Green Building Council of Australia.


The ‘bricks and mortar’ retailers and their mentors feature in the six-part Bricks & Clicks documentary, which premiered on Channel 7 on Sunday 24th February at 1:00pm and continues weekly.

Small business expert, Koch, believes unless you have an online presence, your business is at risk of collapse in this new digital age.

“The biggest barrier to Australian businesses getting online is fear… fear of the complexity, fear of finding someone to trust to help, fear of the high expenses. Our aim is to prove these fears are myths.”

David Koch said there were lots of programs to help tech startups innovate and go global, and he is excited to help transform the thousands of traditional bricks and mortar retailers across Australia who are yet to harness the power of digital.

“They’ve worked hard to build successful brick and mortar businesses, but in changing times many business owners need a hand with selling and marketing online.”

“Our environment has purposely been curated to foster innovation across a diverse range of industries, and this partnership aligns perfectly with our overall vision of supporting enterprise,” he said.

The final episode of Bricks & Clicks reveal how six retailers have progressed on their journey to become global online brands.

The final episode of Bricks & Clicks reveal how six retailers have progressed on their journey to become global online brands.

Managing reputation is about more than looking good in the media, says our own Head of Marketing & Stakeholder Engagement, Jodie Taylor. In this thought leader special, Devan says social sustainability extends beyond the environment to critical issues such as human rights and reconciliation. Our six retailers get some great advice from million dollar mentor Mick Spencer of online custom apparel business ONTHEGO. Plus Netregistry's resident marketing expert Nick Wilson swings by International Towers for another chat as he shares with our business owners his top tips for setting up for online sales.

This week's episode of Bricks & Clicks our retailers get some sage advice from small business success story Irene Falcone who started her small business with just $100 and recently sold it for $20 million and Jason Robinson, Xero accounting partner of the year and CPA director RBK Advisory to chat about payments and some tips on how to manage those cashflow problems.

Our retailers receive some expert business advice from mentor Jane Cay. Cay is the founder of birdsnest, one of Australia's biggest online retail success stories.

Bricks and Clicks - episode one

In this first episode of Bricks & Clicks we meet online success story Jane Cay, the founder of Birdsnest. A fashion retailer based in Cooma, Cay’s brand has a global reach thanks to savvy digital marketing and great products.

| Find out more here at Bricks and Clicks |

*Bricks and Clicks is a step-by-step guide connecting Australian retailers to the tools and resources they need to get online and transform from local retailer to global brand. The initiative includes a television docuseries, free online education platform and live event roadshow.