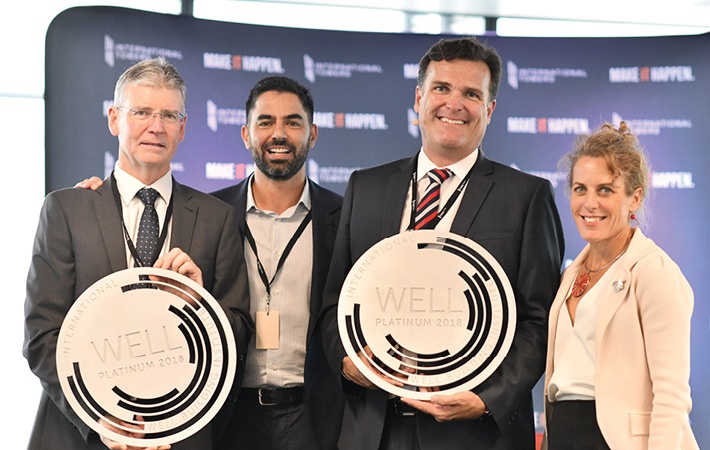 International Towers Sydney, the three buildings that make up Barangaroo’s commercial heart, has earned recognition for being at the forefront of the world’s healthiest workplaces.

The International Towers Sydney are the first in the world to ever be awarded WELL Certification for Core & Shell at the Platinum level, the highest certification available from International WELL Building Institute under its WELL Building Standard (WELL), a performance-based system for measuring, certifying and monitoring features of buildings that impact the health of people who live, work, and learn in them.

In addition, Lendlease’s global headquarters, Tower Three International Towers, has also achieved a Platinum rating for its office fitout. This is the first WELL New & Existing Interiors Project Type to be awarded WELL Certification at the Platinum level in Australia, and the largest globally.

WELL is built on research into the intersection of human health and wellness in the built environment, focusing on the design and operations of buildings, and how they impact and influence human health and wellness. These features include air, water, light, comfort, nourishment, fitness and mind. WELL incorporates the effect of office building design and construction, as well as interior design, materials and fixtures, along with biophilic elements and location and access to amenities, such as public transport.

Lendlease Chief Executive, Property, Kylie Rampa said Barangaroo led the world in providing the precinct’s workers with the world’s healthiest workplaces, and helped confirm Sydney as one of the world’s truly great cities.

“Barangaroo is already counted among the world’s most environmentally sustainable precincts in Australia, now we know that it has a similarly positive effect on the thousands of people who work here every day, she said.

"Better performing buildings, in environmental and social terms, deliver a number of direct economic benefits to investors and tenants, including more productive workplaces and precincts that generate greater value for all,

“If business can cut the amount of time lost to absenteeism and presenteeism, by providing work environments that enhance employees’ health, it has broad economic benefits, including enhanced productivity, she added.