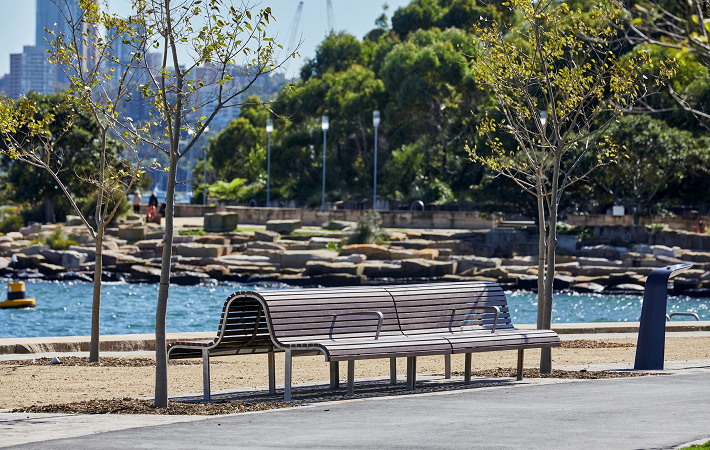 For generations, Sydneysiders and visitors have been unable to walk along the Sydney Harbour foreshore between Walsh Bay and Cockle Bay. It was industrial and commercial land, off-limits to the public.

Now the public have access to Wulugul Walk, a spectacular new foreshore promenade for pedestrians and cyclists in Barangaroo, which connects the stunning 11km harbourside walk from Woolloomooloo to the Anzac Bridge.

Wulugul Walk goes along the Barangaroo precinct foreshore; from Barangaroo House in the south to the northern part of Barangaroo Reserve in the north.

It gets its name from wulugul, the local indigenous word for kingfish, a prize catch for Aboriginal people long before European settlement – and still a delicious treat at many Sydney restaurants.

The wulugul/kingfish has a golden band along its blue-green skin, aptly similar to the golden sandstone lining the blue of the harbour along the length of the new walk.

We’re loving seeing our visitors enjoying it so much that we decided to ask some of them what they think. Unsurprisingly, they’re loving it as much as we are – even Hughesy stopped by to tell us so.

WALK OF MANY LIFETIMES (WOOLLOOMOOLOO TO WULUGUL WALK)

For those who want to enjoy a longer walk, we suggest a 90-minute stroll that takes in the city’s maritime and social history against a backdrop of some of the finest aquatic views in the world.

Begin at Woolloomooloo finger wharfs and follow the existing foreshore paths to Mrs Macquarie’s Chair, through the Royal Botanic Gardens and around the Sydney Opera House.

Brace yourself for bustling Circular Quay, then head under the Sydney Harbour Bridge, into Walsh Bay and Millers Point before arriving at Wulugul Walk to relax and enjoy Barangaroo. 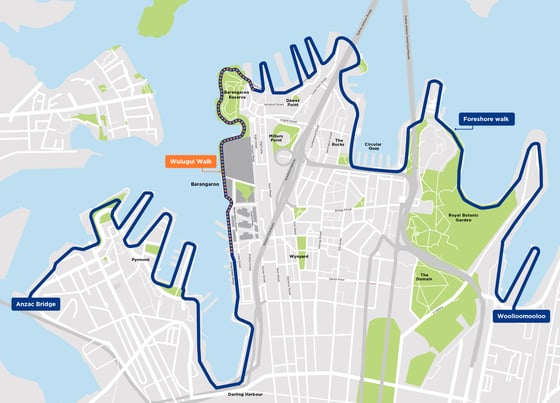